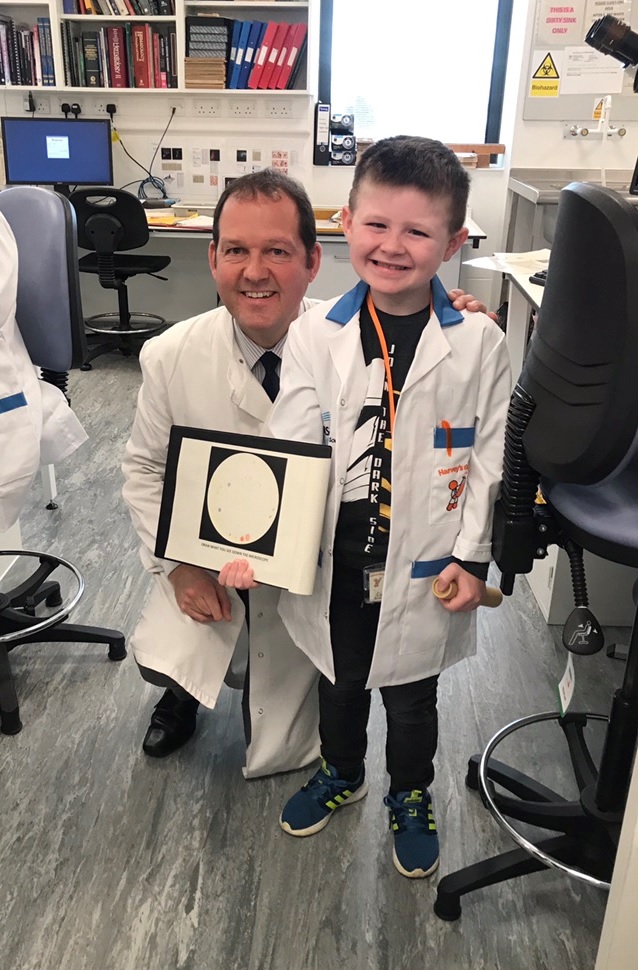 A CHANCE to see behind the scenes at a hospital laboratory has been offered to a young boy from the region.

For the very first time, NHS Dumfries and Galloway has partnered with national charity Harvey’s Gang which offers children a chance to see behind the scenes of medical laboratories.

And on April 8 2019, six-year-old Cupar Rush from Castle Douglas was given a special tour of the Blood Sciences laboratory at Dumfries and Galloway Royal Infirmary in Dumfries which helped diagnose his medical condition acute lymphoblastic leukaemia, or ALL.

Specialist Biomedical Scientist Gayle Johnstone said: “We were really thrilled to welcome six-year-old Cupar Rush and his eight-year-old sister Ailsa as the first visitors into our laboratory thanks to Harvey’s Gang.

“Cupar has spent time in DGRI in the past, and had a good understanding of the work which takes place in a hospital.

“However, you don’t really get to see what happens when samples are taken for testing, so this initiative is an excellent way to demystify that process and introduce all the people busy working away behind-the-scenes to help people who aren’t well.”

Cupar finished his treatment for ALL in October, and his visit to the laboratory provided a chance to meet Specialist Biomedical Scientist Keith Middlemiss who was part of the team in the lab that actually diagnosed Cupar’s condition. Specialist Biomedical Scientist Sue Jeffrey also assisted in the tour. The paediatric lead for Harvey’s gang is Paediatric Ward Staff Nurse Sharron McGarva who also attended the tour.

For the tour, Cupar and Ailsa were presented with special white lab coats sponsored by the Institute of Biomedical Science (IBMS). Cupar didn’t want to wear his coat at first, but when he saw his sister wearing it he quickly put it on.

Accompanied by parents Paul and Tracy, the youngsters got to play ‘I Spy’ around the lab, got to send Harvey the penguin – named by Cupar –  in the pod to paediatrics and wait for a reply, look down the microscope at blood films and draw what they saw, try a colour reaction experiment and handle real blood and platelet bags.

And the day was rounded off by a presentation of certificates, which saw Cupar and Ailsa officially become honorary Biomedical Scientists.

Both Cupar and Ailsa received a goodie bag sponsored by Ortho Clinical Diagnostics, with items including a lanyard, coloured pencils, red leather journal, large red blood cell and many activities to do at home, compiled by Gayle.

Harvey’s Gang was set up by Worthing Hospital’s Chief Biomedical Scientist Malcolm Robinson in memory of a little boy called Harvey Buster Baldwin. The children’s ward contacted Malcolm as Harvey (7), who had leukaemia, wanted to know where his blood samples went and what happened to them. 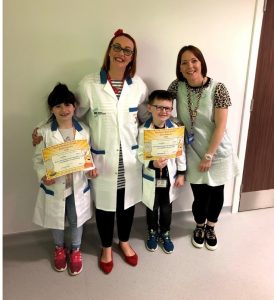 Malcolm arranged for Harvey to come to the pathology labs for a tour and answer all his questions. Harvey loved the tour and the visit was so successful that in his memory ‘Harvey’s Gang’ was set up. Malcolm has won many awards and received recognition for his work with Harvey’s Gang. Due to his dedication, it has expanded to over 47 sites across the globe – with DGRI now proudly being one of them.

Gayle Johnstone said: “It was such a fun time for Cupar and Ailsa, and our teams really enjoyed meeting them, answering their questions and explaining our work.

“We’re delighted that our first laboratory visit through the Harvey’s Gang charity was such a success, and we’re already looking forward to the next one – which will take place in May.” 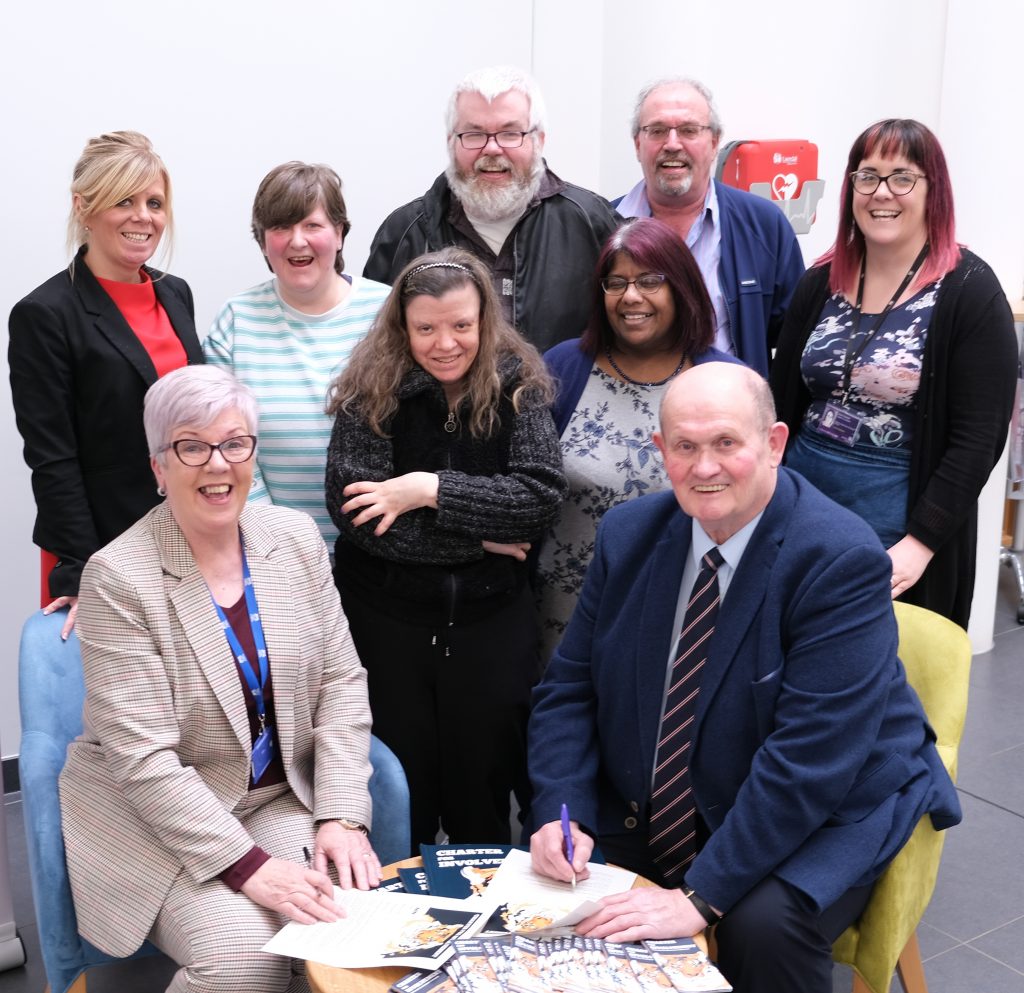 A COMMITMENT has been made to join Adults with a Learning Disability in jointly developing approaches to support and services.

Dumfries and Galloway Health and Social Care Partnership (DGHSCP) is responsible for the vast majority of health and social care services in the region, and has now formally signed the Charter for Involvement.

The Charter has been written by the National Involvement Network (NIN), and sets out in their own words how supported people with a learning disability want to be involved in the support that they get, the organisations that provide their services and with the wider community.

Glen Graham is the Strategic Planning and Commissioning Manager (Learning Disability) for DGHSCP and he said: “We’re very serious about our commitment to work in partnership with Adults with a Learning Disability, and so we’re delighted to now have signed a Charter which helps cement that pledge.”

Since September 2017 the Partnership has been carrying out a scoping exercise of existing services and support provided to Adults with a Learning Disability living in Dumfries and Galloway, acting on the directions of the IJB.

Glen said: “As part of this work, the views and experiences of people with a learning disability, their families, carers and people who provide services have contributed to an understanding of existing resources.

“They have also served an important role in highlighting the challenges we currently face and are likely to face going forward.

“The principles contained within the Charter for Involvement reflect outcomes that the Health and Social Care Partnership is working to achieve for people with a learning disability, their Carers and families. They are also directly linked to the objectives of the national Keys to Life Strategy.”

The Integration Joint Board sets the direction for health and social care services in the region, and newly-appointed Chair and Vice Chair Councillor Andy Ferguson and Penny Halliday were joined by representatives of the NIN for the official charter signing – including members of the local Powerful Voices Service User Group and a representative of ARC Scotland.

Councillor Ferguson said: “The Charter is a very significant document, and I’m proud that one of my first acts as the new Chair of the IJB was to sign our commitment to adopt the approach it sets out.

“A lot of good work has already taken place in Dumfries and Galloway with Adults with a Learning Disability, but there is still a lot that needs to be done around developing services and support.

“This document is a crucial part of the jigsaw – and will make an integral contribution towards the current work to develop a joint Learning Disability strategy for the region.”