Skip to content
GENEROUS donations are helping motorcyclists from the charity Blood Bikes stay safer on the roads – thanks to the purchase of innovative new gear.
The small army of riders in Dumfries and Galloway who give up their time transporting blood and test materials have become the very first team in the whole of the UK to be kitted out with potentially life-saving jackets which automatically inflate if the motorcyclist comes off their bike.
Dave Hook is chairman of Dumfries and Galloway Blood Bikes, and he said: “These jackets are truly extraordinary pieces of kit, and an extremely welcome addition locally.
“Every day we have teams of motorcyclists carrying out really vital work transporting supplies of blood as well as materials for testing, and this takes them the length and breadth of the country. This is all done by unpaid Volunteers who donate their time to make a difference to our region.”
“Thanks to extremely generous conditions and the support of a manufacturer, we’re now in a position to kit out our riders with these jackets which may prove truly life-saving if the worst should happen.”
Dave says it was a crash involving a local rider on a ride out with a member of the group which prompted the move to acquire the inflatable jackets.
He said: “A rider came off their bike at a relatively low speed. He went over the top of his bike.
“The consequence was that he received life changing injuries. He’s made a recovery, but that incident did highlight to the trustees that we needed to look more at safety for our volunteers. We picked up the ball, and looked to see how we could ensure every one of our riders had the very best protection.”
Helite manufacture body worn inflatable airbag protection jackets and supply through Airvest in the UK, who are supporting Blood Bikes charities throughout the UK. However, Dumfries and Galloway Blood Bikes are the first in the UK to supply all riders with air vests and crash helmets with comms kits. 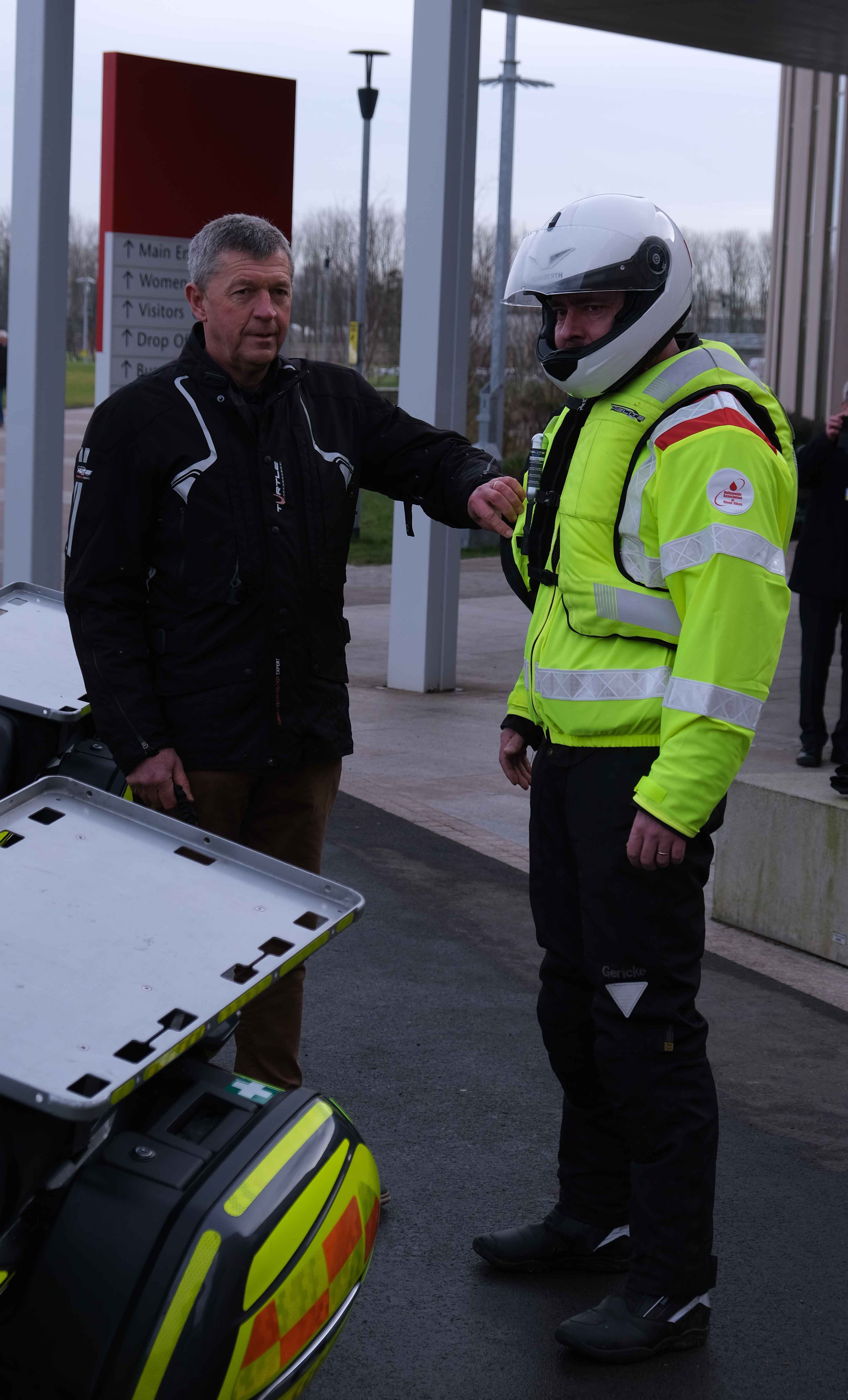 Four vests were paid for by Moffat Hospital League of Friends, and more than 40 vests were funded through money provided by Dumfries Hospitals League of Friends. Other contributions have helped to kit out all the riders. The helmets are funded through the Dumfries and Galloway Community Safety Fund.
A spokesman for the company Airvest said: “We’re delighted to be able to support Dumfries and Galloway Blood Bikes in the important work they carry out within the region and throughout the UK.
“We hope that the Airvests we’ve provided will help to ensure the safety of those riders as they take to the roads, and provide them with greater confidence as they carry out this work.”
In the case of an accident, the Airvest protects the thorax and spine from direct impact, and supports the base of the helmet preventing neck injury by limiting hyeprflexion and extension. The jacket remains inflated for seven minutes, holding the rider in a safe position.
Dr Peter Armstrong is a consultant in Emergency Medicine with NHS Dumfries and Galloway, and he said: “We’re no strangers to the sometimes very serious injuries that can be experienced by motorcyclists.
“Ensuring you take every possible precaution such as wearing proper protective clothing is going to be very important in ensuring the best outcome if things go wrong. Of course, we would always advise motorcyclists to take great care when out in the roads, and give full consideration to the conditions.”
In addition to the inflatable jackets, Dumfries and Galloway Blood Bikes are also celebrating the addition of two new bikes to their fleet – thanks to the support of local supermarkets. 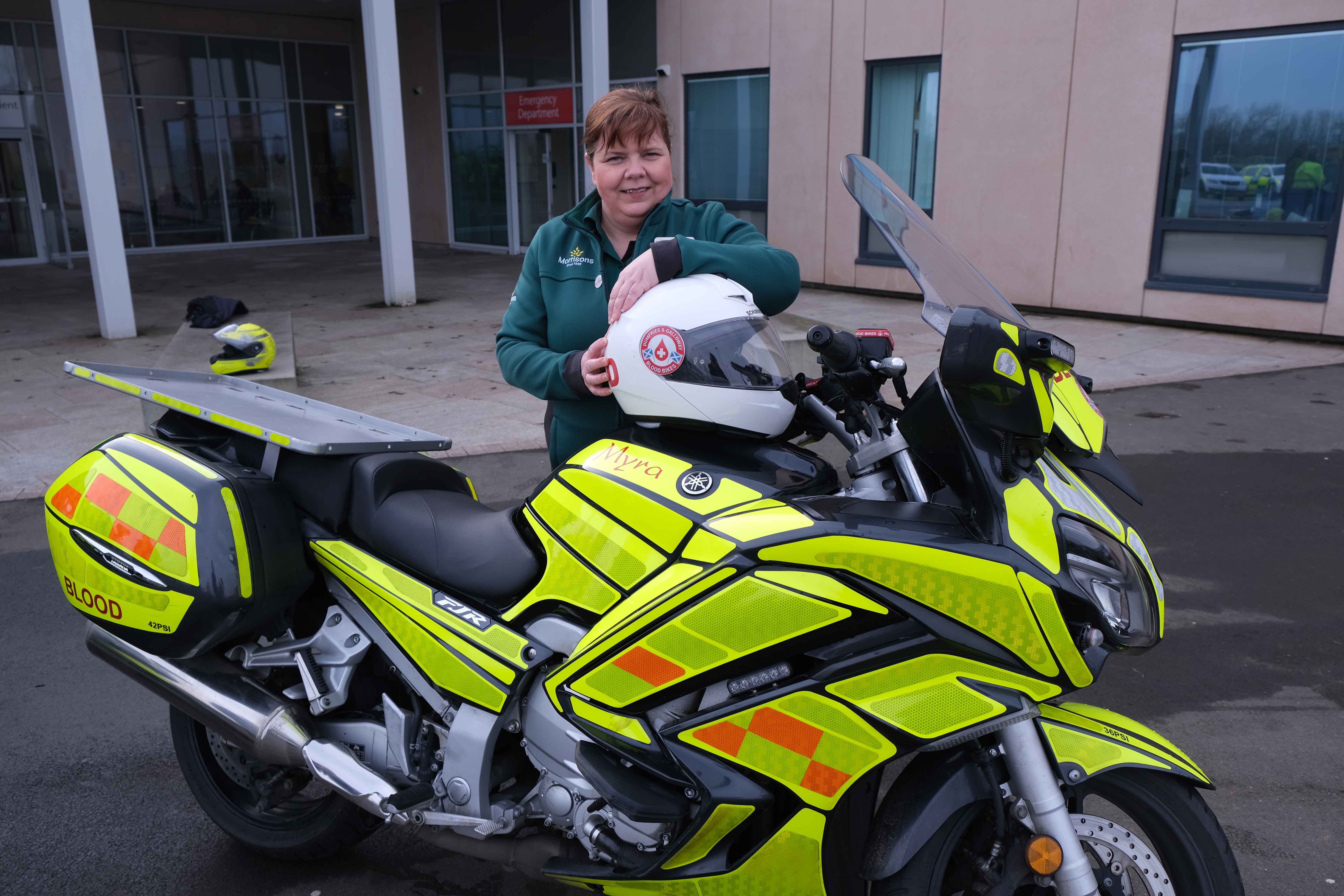 One of the bikes has been paid for solely by Morrisons while the other has been partially funded by Tesco and Insured by McCowans of Dalbeattie. The two bikes have been named Frances and Myra. Frances McCowan sadly died and donated funds to insure a bike and Myra is the Community Champion for Morrisons and has supported DGBB through the Morrisons Foundation since DGBB started.
Dave Hook said: “We can’t thank Morrisons, McCowans and Tesco enough for their generosity.
“We also owe a massive debt to those organisations which funded the purchase of the Airvests, and to everyone who has and continues to support the work of Blood Bikes in Dumfries and Galloway.
“I think I speak for all our riders when I say that we’re immensely proud of what we’re able to do to help NHS Dumfries and Galloway, and to be given such support from the community is just amazing.” 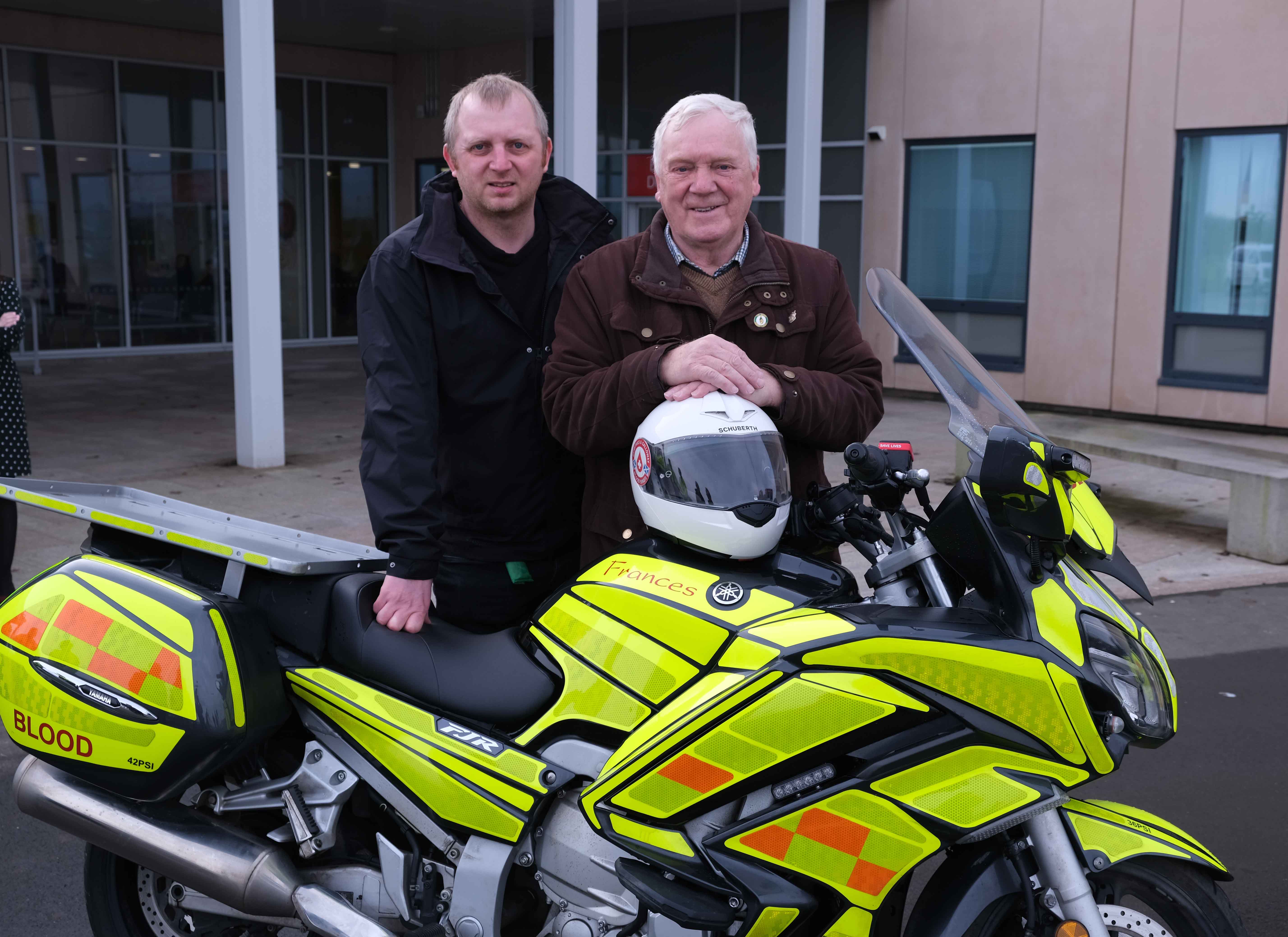