A GROUP of supported adults with learning disabilities have generated funds for two good causes through a fund-raising bingo night. 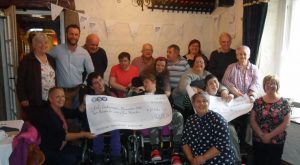 The Happy Night Owls, or ‘HOOTS’, used this year’s national Learning Disability Week to host a bingo night which raised £526 – with the money split between the Neonatal Unit at Dumfries and Galloway Royal Infirmary and the hospital’s Alexandra Unit.

Kirsty Miller is manager of Castle Douglas Support Service, which is a housing support and care at home service for adults with learning disabilities in the area.

She said: “We created a group for the supported people which meets once a month. This is called The Happy Night Owls, or HOOTS for short.

“Scotland’s national Learning Disability week took place from May 13 to 19, and the theme this year was community.

“One of our supported people who suggested neonatal said, ‘From the moment they unexpectedly arrive their lives are so precious.

“Our supported people worked very hard to help make the night a resounding success. They approached local business in Castle Douglas and were gifted a wealth of prizes for the bingo, from large bars of chocolate for winning a line to vouchers for local business for a full house.

“The community came together by making or donating food for our supper and prizes for our bingo as well as their participation. Even our bingo caller volunteered.

“It was a truly brilliant night which took the whole community to make it the success it was. I am truly proud of our group’s selfless efforts and community spirit.”

A total of £526 was raised, and representatives of DGRI’s Neonatal Unit and Alexandra Unit were asked along to the HOOTS group to be presented with a cheque.

General Manager for Women, Children’s and Sexual Health Linda Williamson said: “We were absolutely delighted to receive these donations from HOOTS, and extremely grateful that they chose these two recipients.

“Learning Disability Week is an annual campaign to raise awareness of issues around learning disabilities, and it’s fantastic that HOOTS used this year’s theme of community to create something that would benefit these services.

“We’re very grateful to HOOTS for their thoughtfulness and generosity.”